Australia wins the Cricket World Cup for the fifth time 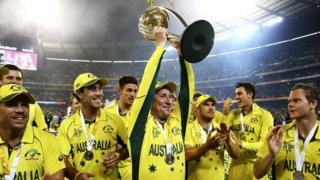 Australia have beaten New Zealand to win the World Cup for the fifth time.

The Australians won by seven wickets with Captain Michael Clarke scoring 74 and Steve Smith scoring 56 not out.

And Mitchell Starc ended the 2015 World Cup tournament with the best ever World Cup bowling average.

It was Clarke's final one-day international and at the end of the match he was given a standing ovation by the record 93,000 crowd.