Guide: How did Harry Kane get so good? 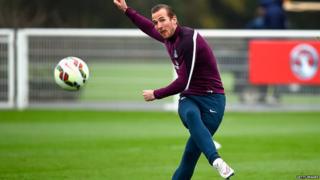 Tottenham striker Harry Kane took just 79 seconds to score a goal against Lithuania in his first ever game for England.

Friday's dream debut for the star comes on the back of an amazing first season in the Premier League.

He has scored 29 goals this season for Tottenham, becoming the joint top scorer in the league in the process.

But where did it all begin for the 21 year old footballer?

He Signed for Spurs at the early age of 11 years old and went through the various age groups of Tottenham's youth system. 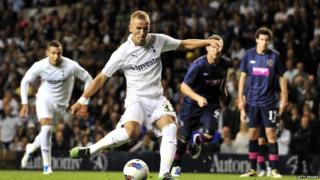 He appeared on the bench twice for the first team but then was sent out on loan.

After his loan spell at Orient he moved back to Tottenham, making his first appearance in the second leg of their Europa League match against Hearts.

He went on to play six times in the cup and scored his first Tottenham goal against Shamrock Rovers. 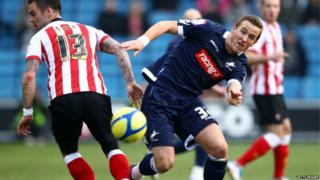 In late December Kane decided to go on loan to Millwall until the the end of 2012 season and scored nine goals in 27 appearances.

His efforts meant he was awarded Millwall's Young Player of the Season award.

Kane spent pre-season with Tottenham in the 2012-2013 season and made his Premier League debut, when he came off the bench, during a match against Newcastle United.

In the summer of 2012 he joined Norwich City on loan for the full season but got hit with an early injury and had to go back to Tottenham for treatment. 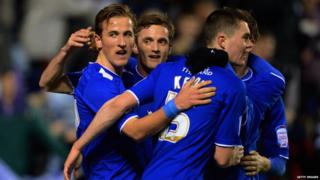 At the start of 2013 he moved to Leicester City on loan for the rest of the season, to help with their push for promotion from the Championship into the Premier League.

He scored on his debut but only made 13 appearances. 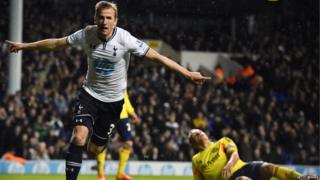 His good form started in last year's season when he scored his first goal at White Hart Lane in the League Cup.

Harry scored his first Premier League goal on his debut in a huge 5-1 win against Sunderland.

He made his first appearance of this season, when he came off the bench to provide the assist for the winning goal.

He then went from strength to strength and scored numerous goals in the Europa League and Capital One Cup before becoming a regular in Spurs' Premier League team. 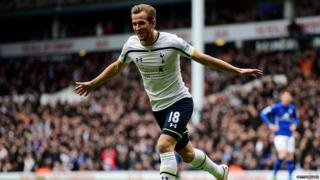 As the goals started flying in picked up Premier League Player of the Month Award for February.

He netted his first Premier League hat-trick in a 4-3 home win over Leicester City and now has 19 for the season, making him joint top scorer, with Chelsea's Diego Costa, in the league.

After such an amazing season England boss Roy Hodgson couldn't resist calling him up to the international squad for the first time for the games against Lithuania and Italy.

AFP/getty images
Will the Hurri-Kane get his first England cap against Lithuania? His chances are looking good

But England captain Wayne Rooney has warned everyone to give Kane time to adjust and not expect him to score as many goals internationally as he has in the league this season.

Rooney said, "Although he has done really well, we have to give him room to breathe rather than smothering him and demanding a lot at an early age."

England Vs Lithuania kicks off at 7.45pm on Friday at Wembley Stadium.