People around the world are talking about China's "magic bunny", the cutest endangered animal that you have never heard of.

Sixty-year-old retired conservationist Li Weidong has been on a mission for over 30 years to protect the highly-endangered Ili Pika - a mysterious rabbit-like mammal only found in China.

With less than 1,000 left they are now rarer than pandas. 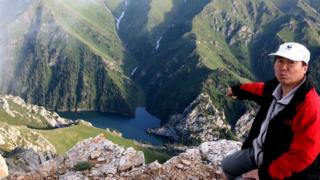 "I sat down next to some rocks, and suddenly two bunny ears emerged from the crack of one of the rocks. The little thing was staring at me, blinking at me. I thought it was the most beautiful and bizarre creature I'd ever seen. I couldn't believe my eyes" he said.

There are many different kinds of pikas - small rabbit-like mammals with short limbs and round ears - but the one Mr Li spotted had three distinct brown stripes on its forehead and around its neck.

The Ili Pika live in holes between bare rocks at heights of 2,800m to 4,000m above sea level. They are used to living in an extremely cold environment and feeding on herbs found in the Tian Shan mountains.

The natural prey of foxes, weasels and birds, the Ili Pika now face a new danger. 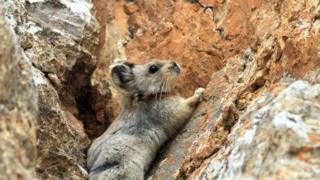 The Ili Pika lives in holes in the bare rock and is hunted by foxes, weasels and birds

This is partly because of climate change and partly because their grazing area has been taken over by a growing population of people at the bottom of the mountain.

"Many people have written to me to say they want to help me protect the pikas," Mr Li said.

"We cannot let them disappear in front of our eyes."