Zayn Malik has left One Direction, the band has said in a statement.

1D will continue as a four-piece for their world tour and will still record their fifth album later this year.

Zayn said "My life with One Direction has been more than I could ever have imagined. But, after five years, I feel like it is now the right time for me to leave the band." 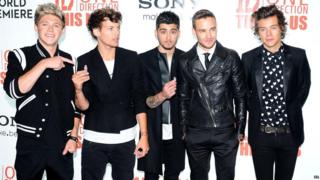 "I'd like to apologise to the fans if I've let anyone down, but I have to do what feels right."

The remaining members of One Direction said: "We're really sad to see Zayn go, but we totally respect his decision and send him all our love for the future."

If this news has upset you then click here to get some advice to help you.

What do you think about Zayn leaving?

I'm quite upset but happy because maybe Zayn will do good on his own but I'm upset because now there are only 4 boys in 1D.

I never liked 1D in the first place so I think that Zayn is better off out of the band!

I am quite upset about the news but I am glad he made the right decision for him.

Zayn is not my favourite but 1D won't be the same without him. You will be missed!

I'm so upset to hear that he is leaving. Zayn was my favourite member of the band but I will support him no matter what. I hope the rest of the band have a good future.

I actually loved One Direction when I was younger, but now I'm in love with 5SOS. It's really sad to see Zayn go. It just won't be the same.

Zayn Malik is the glue of the band. He is the one who holds 1D together. It will not be the same without poor Zayn.

I think that we will hear more from Zayn as a solo artist but I am upset.

One Direction have a lovely voice but now Zayn's left the four might sound horrible.

I think One Direction should get Olly Murs to join them because they are amazing already and Olly would bring it up to a whole new level!

Although Zayn is not my favourite, it will not be the same without him. I will miss him.

I am really upset that Zayn is leaving One Direction because he was my favourite band member.

Zayn was my favourite member of the band. It will never be the same without him!

I feel sad that Zayn is leaving because he was my favourite.

I didn't really like Zayn but I love Niall. The band might be better in the future.

I'm sad that Zayn has gone but I don't think he's the best member.

I feel let down because Zayn said on The X Factor that the band were definitely going to stay together and it wasn't the last of One Direction.

Zayn Malik was great in the band and he does a lot of singing in the songs. I don't know what One Direction will do without him. Liam is my favourite but it won't be the same without Zayn. Bye Zayn!

I am really upset about Zayn leaving. I am a big fan of One Direction and I will miss him. Come back Zayn please!

I think that Zayn was an amazing member of the band and he had a future in singing. It's a shame to see Zayn go because they were my favourite band.

One Direction will never be the same again because without Zayn they no longer make One Direction. I cried all last night but I will still support them as I have for the past 5 years.

I feel sad that Zayn is leaving because it won't be as good.

I hate One Direction so I was really happy when I heard Zayn had left.

I was really sad to hear about Zayn leaving but we all make our own decisions and that was Zayn's. Although he wasn't my favourite in 1D, I'll still miss him and it won't be the same.

I'm going to see One Direction in Cardiff in June and the concert won't be the same without him.

I don't understand why people are upset.

I can't believe it! He was one of the best. Will One Direction turn into Wrong Direction?

I think that One Direction are great as a full band. Even though Zayn is not my favourite in the band, it still won't be the same without him. It was always the 5, but now its the 4. Before you know it, it will be the 3, then the 2, then a solo artist.

I think One Direction should stay together because they are a great band . Have a great future Zayn!

I am really upset that Zayn has left but I am excited for the band's future.

Good luck Zayn! I will miss you from 1D.

I think One Direction will carry on without him because they want to carry on. It's their choice and in this case no one's right or wrong.

I think that Zayn made the right decision to leave One Direction, even though I'll be very sad to see him leave!

Thanks for all your comments. This chat page is now closed.