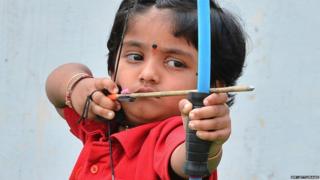 A two-year-old Indian girl has set a new national record in archery, according to the India Book of Records.

Dolly Shivani Cherukuri from the southern state of Andhra Pradesh became the youngest Indian to score more than 200 points at a trial event on Tuesday, according to the Press Trust of India.

Her achievement was witnessed by India Book of Records officials. 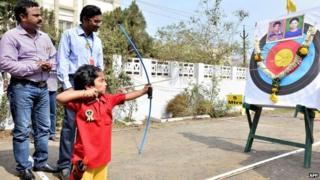 AFP
Dolly comes from a family of archers

Dolly's father, Cherukuri Satyanarayana, said she had been trained since birth to be a champion.

"When we came to know that the baby was on her way we decided to mould her as an archer," said Mr Satyanarayana. 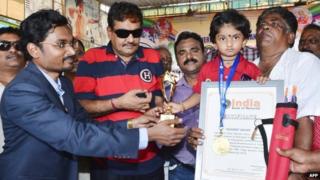 "My daughter achieved the feat we have been dreaming... I can't express in words how happy my family is," he added.

He said they would now try to get Dolly's name entered into the Guinness Book of World Records.