Martin Skrtel has been hit with a three match ban 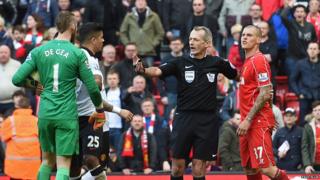 Liverpool defender Martin Skrtel has been issued with a three match ban.

It comes after he stood on goalkeeper David De Gea in the last seconds of Liverpool's 2-1 home defeat by Manchester United on Sunday.

The referee missed the foul and Martin Skrtel has said he didn't intend to do it.

The ban means Skrtel will miss big games against Arsenal and Newcastle, plus the FA Cup quarter-final replay at Blackburn.

1 hour ago1 hour ago
25
Newsround Home