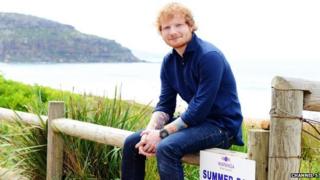 Ed Sheeran will make an appearance on an Australian TV show.

The singer is touring down under right now and visited the Home and Away set this week to film some scenes for an episode that'll air later this year.

"He will appear as himself in the series," said a Channel 5 statement. "But storyline details about what brings Ed to Summer Bay are being kept under wraps for now."

Ed still has gigs coming up in Sydney, Melbourne, Adelaide and Perth.