Football legend Thierry Henry amazed pupils at a school in Wales by walking into their classroom disguised as a supply teacher.

The ex-France and Arsenal striker wore glasses and a wig to surprise teenagers at Pen-y-Dre High School in Merthyr.

Henry was there to present the Sky Sports Living for Sport Student of the Year Award for Wales to pupil Emma Morgan.

The awards programme is on Sky Sports 1 on Sunday.

A talented swimmer, Emma became the school's youngest student to represent Wales at the annual European 'Superschools' competition, in Sweden, where she won silver. 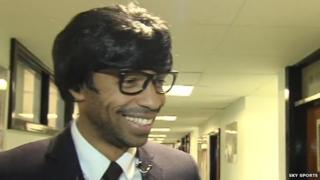 She will attend the awards ceremony in London at the weekend where the overall UK and Ireland Student of the Year will be announced.

Head teacher Keith Maher said: "Everyone was sworn to secrecy and it was an idea that Thierry and Sky came up with.

"It was absolutely a complete surprise and very few staff knew about it."