Super salamander was top predator over 200 million years ago 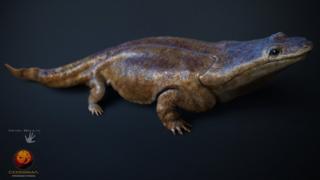 The remains of a previously undiscovered species have been found in Portugal.

It is thought to be a member of the crocodile-like amphibian species, and looked like a giant salamander.

The species has been named Metoposaurus algarvensis. It lived at the same time as the dinosaurs nearly 200 million years ago. 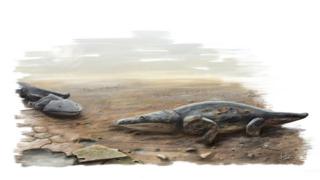 The creatures were distant relatives of the salamanders of today but much bigger and fiercer.

Dr Steve Brusatte, of the University of Edinburgh's School of GeoSciences, said: "It was as long as a small car."

He said: "It had hundreds of sharp teeth in its big flat head which kind of looks like a toilet seat when the jaws snap shut."

"It was the type of fierce predator that the very first dinosaurs had to put up with if they strayed too close to the water, long before the glory days of T-Rex and Brachiosaurus," he added.

The new species was discovered in a large bed of bones.

It's thought several hundred of the creatures may have died when the lake they lived in dried up.

Only a small part of the site has been excavated so far and the team of palaeontologists are still looking for more new findings.

Turning a street into a classroom