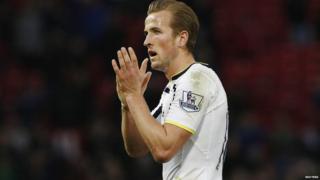 Harry Kane has been called up to the senior England football team for the first time.

The Tottenham striker has been named in the squad for the Euro 2016 qualifiers against Lithuania and Italy at the end of the month.

This season alone, Kane has scored 26 goals in 42 games.

"I think the whole country is excited about Harry," said the England manager. "It would have been a surprise if he wasn't selected."

England face Lithuania at Wembley on 27 March before a friendly in Turin against Italy on 31 March.

Arsenal are through to FA Cup Semi-Final at Wembley

Frank Lampard tells us why he loves books and reading