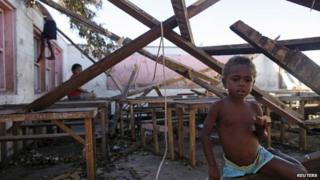 Reuters
Most of the homes and buildings have been partly or completely destroyed in Tanna, aid agencies say

Emergency aid is beginning to reach some of the worst-hit islands of Vanuatu, helping people there after a cyclone destroyed whole villages.

The powerful storm swept across the Pacific islands on Saturday leaving thousands of people homeless. Eleven people are known to have died.

Planes have taken food, water and medical supplies to one of the worst-hit islands, Tanna island.

But charities say much more aid will be needed in the weeks to come.

People there are still in desperate need of shelter and water.

United Nations worker Joe Lowry, who is on Tanna, told the BBC: "We know what the needs are now on six of the islands and... everywhere else and those needs are definitively shelter and more shelter.

"Where I was today they are pretty much out of fresh drinking water.

"Food is in very short supply and lots of the food stocks that were there have been damaged. The food that was growing above ground was all swept away."

Aid workers reached Tanna for the first time on Tuesday and reported 80% of homes or buildings had been partially or completely destroyed. 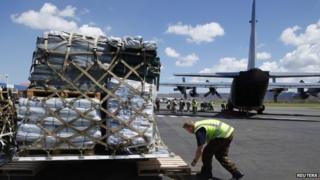 Reuters
Aid is arriving - a ferry full of additional relief supplies is expected to reach Tanna's 30,000 people on Thursday

"There's a landscape of skeleton trees and patchworks of square outlines where houses used to be," said Angus Hohenboken from aid group Oxfam.

He added that the fierce winds had uprooted water tanks and blown them miles away. Crops were demolished and electricity was out. 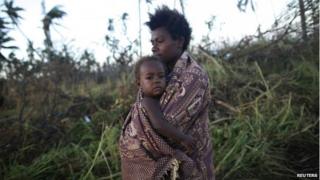 Baldwin Lonsdale, Vanuatu's president, returned to his country on Tuesday night. He'd been in Japan attending a UN conference when the cyclone hit.