What is a solar eclipse?

A solar eclipse occurs when the Moon's orbit lines up in between the Sun and the Earth.

The Moon blocks out the Sun's light for a short time, casting a shadow on the Earth.

It's a rare event and only possible when the Moon is at exactly the right distance from the Earth.

Get Involved: How will you watch the eclipse?

When can I see an eclipse in the UK?

On Friday 20 March the UK will experience the first eclipse of 2015.

It will be a partial eclipse, so the sky will darken but the Sun will still peek out from behind the Moon. 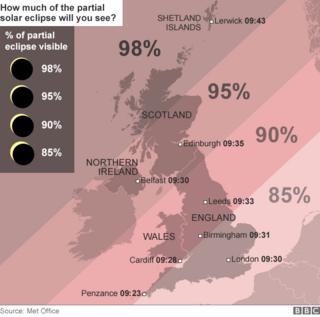 9.31am - the Moon will be nearest the middle of the Sun

10.41am - daylight is restored and the eclipse is over

"In 1999, when there was the last major eclipse, no-one really had smartphones or took selfies," said Daniel Hardiman-McCartney, an eye expert from the College of Optometrists.

"This could potentially be very dangerous because people might be tempted to look at the Sun as they try to get the perfect shot or clip."

How can I safely watch the eclipse? 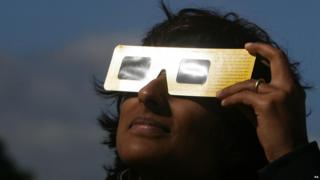 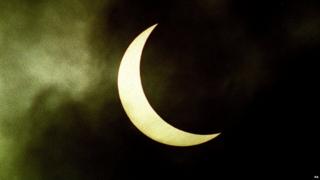 PA
...but the safest option is to watch the eclipse broadcast on live TV.

How to make a pinhole camera

Another way to safely enjoy the eclipse is to make a pinhole camera. This will project an image of the eclipse onto card.

You'll need two pieces of card. Make a small hole in the centre one of them - no more than 4mm across.

Tilt the card with the hole towards the Sun and use it to project an image of the eclipse onto the other card. 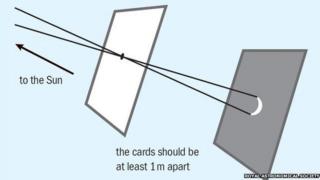 When is the next eclipse in the UK?

The next big partial eclipse in the UK will be in August 2026.

The UK hasn't seen a total solar eclipse - where the Moon completely covers the Sun - since 1999, and won't get another one until 2090.

How UK kids watched the eclipse