Many people believe William Shakespeare is the best British writer of all time.

His many works are about life, love, death, revenge, grief, jealousy, murder, magic and mystery.

He wrote the blockbuster plays of his day - some of his most famous are Macbeth, Romeo and Juliet, and Hamlet.

It has been almost 400 years since he died, but people still celebrate his work all around the world.

What do we know about Shakespeare?

William Shakespeare was born in Stratford-upon-Avon, England in 1564.

Nobody is exactly sure which day he was born, but we do know he was baptised on 26 April that year.

In 1582 he married Anne Hathaway and the couple went on to have three children.

Shakespeare lived in London for 25 years and wrote most of his plays here.

Shakespeare wrote 37 plays (though some experts think it may have been more). He wrote three different types of plays:

Histories - about the lives of kings and famous figures from history

Comedies - which end with a marriage

Tragedies - which end with the death of the main character

Shakespeare also wrote plenty of poetry and in 1609 published a book of 154 sonnets.

We know his work was popular at the time because he earned enough money to live in a smart area of London, where he wrote some of his most famous plays.

He had an incredible influence on the English language and invented hundreds of words we still use today.

Here are some of the more than 1,700 words first used in Shakespeare's writing: 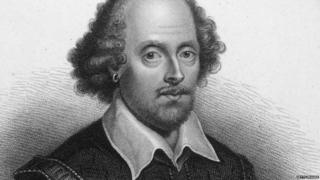 As well as writing plays, Shakespeare performed on stage with a group of actors called the Lord Chamberlain's Company.

When James I became king in 1603 the group was renamed the King's Company.

The group performed in two theatres near the banks of the River Thames in London - the Globe and Blackfriars. Shakespeare went own a share of these theatres.

In Shakespeare's time, women were not allowed to act on stage so all the female parts had to be played by boys.

To find out more go to the BBC Bitesize Shakespeare page