Sam Smith scores double number one in the UK charts

Madonna's latest album had been number one throughout the week, but Sam's album In The Lonely Hour sneaked ahead at the last minute.

His collaboration with John Legend, Lay Me Down, also hit the top spot in the Singles Chart.

It's Smith's fourth number one in less than two years, and Legend's first UK number one.

In The Lonely Hour has now topped the album chart six separate times - a record for a male solo artist.

Only three other albums have done better - Simon and Garfunkel's Bridge Over Troubled Water, which topped the charts on eight occasions; followed by Adele's 21 and Emeli Sande's Our Version Of Events, both of which managed seven.

The album version of the song, which doesn't feature John Legend, also charted at number 18. 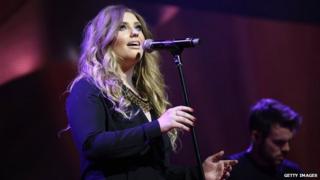 Getty Images
Ella Henderson, saw her album Chapter One leap 10 places, from 22 to 12

Elsewhere in the album chart, boyband Blue claimed their sixth top 20 album with Colours, which landed at 13.

Another Comic Relief performer, Ella Henderson, saw her album Chapter One leap 10 places, from 22 to 12.

And in the singles chart, rapper Flo Rida was a new entry at number three.