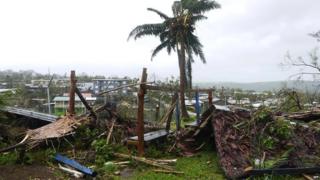 The president of Vanuatu says his nation needs help "right now" after Cyclone Pam hit the country at the weekend.

The powerful storm swept across the Pacific islands on Saturday leaving thousands of people homeless.

Many family homes have been stripped of their roofs or flattened by the strong winds and heavy rain.

President Baldwin Lonsdale says "everything" will have to be rebuilt.

Aid agencies say it could be one of the worst disasters ever to hit the region.

Vanuatu is one of the world's poorest nations with 267,000 people living over 65 small islands.

The situation on some remote islands closer to the eye of the storm is not yet known as communications are down.

Air force planes arrived with supplies from Australia and New Zealand, and other countries have pledged to help. 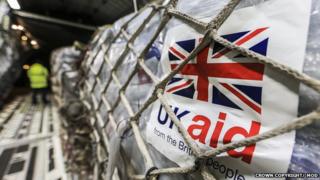 Crown Copyright/ MoD
The UK has pledged £2 million in aid

A state of emergency

The cyclone did not follow the course it was expected to take, and hit populated areas. It has destroyed schools and medical clinics, and thousands of homes.

At least eight people have died although it is feared this number will rise. 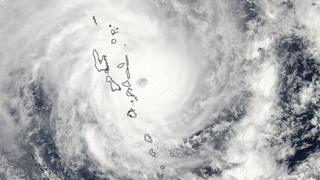 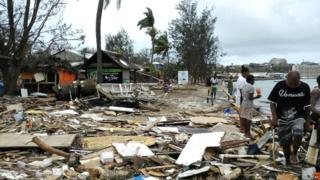 AP
The debris from buildings has blocked roads

Cyclone Pam had already caused major damage on other Pacific islands, including Kiribati and the Solomon Islands.

Tuvalu, another group of islands, also declared a state of emergency after the cyclone caused flash floods there.

How to clean up after a cyclone