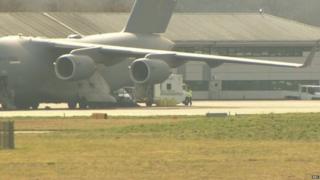 The military plane flies the patient to the UK for treatment

A British military health worker who contracted Ebola in Sierra Leone has arrived back in the UK for treatment.

There are seven hundred military workers from Britain tackling the outbreak in West Africa.

She's being treated at the Royal Free Hospital in London in a special isolation unit.

Treatment in the UK is much better than the facilities in West Africa. 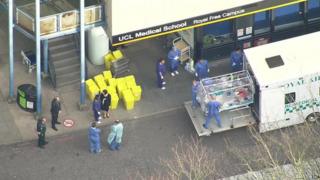 The patient arrives at a UK hospital for treatment

Public Health England insist there is ''no threat to the general public''.

Hundreds of UK military workers are based in Sierra Leone to help tackle the virus across West Africa.

The government here says there are strict measures to keep them safe, but there's "always a level of risk".

The service personnel have been praised for their "courage and dedication" in Sierra Leone.

For more help to explain what Ebola is and to have all your questions answered, read the special Newsround guides.