England knocked out of Cricket World Cup by Bangladesh 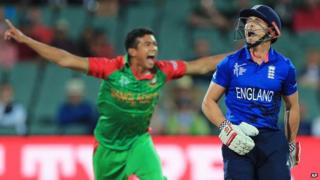 England's cricketers have been knocked out of the Cricket World Cup in the group stages, after losing to Bangladesh.

Set a relatively easy 276 to win they were bowled out for 260, leaving them fifth in their group and unable to qualify.

Jos Buttler hit a quickfire 65 and Ian Bell 63 but England collapsed in the middle of the innings and couldn't make the total.

It's the third time in five World Cups that England have been knocked out at this stage.

Pundits have suggested that England coach Peter Moores isn't the right man for the job, but he says he wants to carry on.

So far, England have played five matches at the tournament, and have won just one of them, against Scotland.

Australia, New Zealand and Sri Lanka all beat England heavily in their matches.