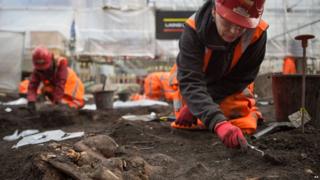 PA
The Bedlam burial ground where over 20,000 Londoners are believed to have been buried between 1569 and 1738

Archaeologists are beginning a huge dig of medieval skeletons from a burial ground in London today.

The ancient cemetery has been unearthed by workers digging for a new railway that will run through London.

The dig will examine nearly 3,000 skeletons that were buried in the 1600s during the Great Plague. 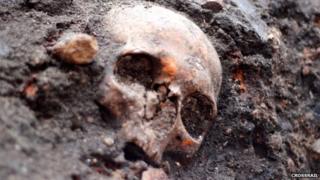 Crossrail
More than 400 skeletons have been uncovered already

Around 60 archaeologists will work six days a week for the next month, to remove the skeletons and carefully record evidence from the site.

The lead archaeologist on the project, Jay Carver said: "This excavation presents a unique opportunity to understand the lives and deaths of 16th and 17th century Londoners."

By carrying out tests on the skeletons, scientists hope they'll be able to gain a better understanding of how the bacteria that caused the plague evolved.

The deadly Plague was spread by gerbils not rats