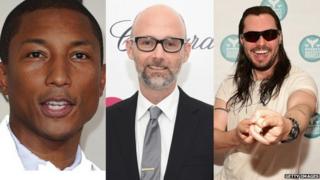 Getty Images
Pharrell, Moby and Andrew WK all want to be at the party. Moby will DJ for free

Be proud of your dancing and be enthusiastic on the dance floor.

That's the message to anyone who likes to move when they listen to music.

Pharrell and Moby have all given their support to Sean from London. 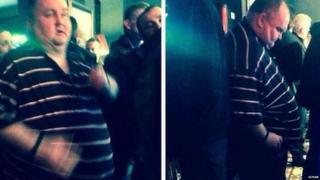 He's now been nicknamed ''Dancing Man'' after he was tormented online for dancing at a concert.

He became well known around the world after photos with a cruel comment was shared online.

It said he stopped dancing when a group of people started laughing at him.

But he's having the last laugh now, after the picture went viral and thousands urged him to keep on dancing no matter what anyone says.

He's now been invited to a private party in Los Angeles - being organised in his honour - after a campaign to stand up to the bullies. 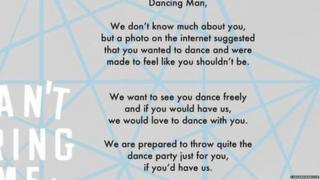 Cassandrarules
The invitation to Dancing Man from 2000 people

Dancing Man has accepted the invitation.

Moby has now offered to DJ at the party for free saying "No-one should be ashamed of dancing".

Pharrell may also perform. He said ''Never be ashamed of yourself.'' 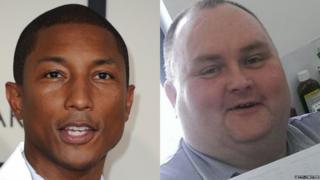 Dancing Man has thanked everyone for their encouraging responses

Twitter
Dancing man getting ready for the party with a friend

"Just woke up to be greeted with so many more kind words. Big thanks again".

Tell us what you think?

Should everyone feel free to move in their own individual way on the dance floor- without fear of being laughed at.

We want to know your thoughts -Tell us about your great original moves and why dancing makes you feel good.