Nasa's Dawn probe has gone into orbit around the dwarf planet Ceres, after seven years whizzing through space.

Ceres is the largest object in the Solar System between Mars and Jupiter.

It's the first time a man-made object has visited a dwarf planet.

What is a dwarf planet?

For the next 14 months, the Dawn probe will study Ceres to find out more about the birth of the Solar System.

Delving back in history

Over the next few weeks the probe will drop closer to Ceres, so it'll be able to study the surface.

Dr Carol Raymond, a Nasa scientist who's managing the project, says dwarf planets can tell us more about how the Solar System formed.

She says "they were on their way" to becoming more like full-size planets, but never got that far.

She said: "These two stopped before they reached that evolutionary stage, and so they are essentially these intact 'time capsules' from the very beginning of our Solar System." 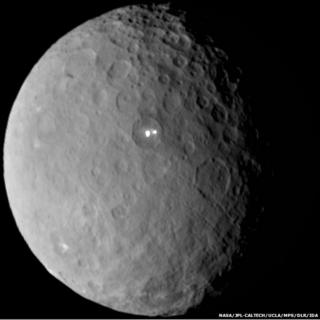 NASA/JPL-Caltech/UCLA/MPS/DLR/IDA
What are these bright spots? Nasa experts hope to find out...

The scientists are hoping to find a liquid ocean of water beneath Ceres' surface.

They'll also want to find out more about two mysterious bright spots that have been seen inside a huge crater on Ceres.

Experts think these spots are newly-created holes in the surface, where meteorites have struck the dwarf planet and revealed very reflective salts below.

Who should take over at Man United?

Is your artwork similar to an orangutan's?

Could this be the longest dinosaur EVER found?