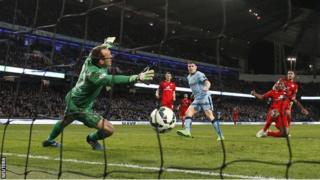 The top four teams and the bottom sides fighting to avoid relegation were all in action on a busy day for the Premier League. Newsround runs through everything that happened on Wednesday night.

Manchester City returned to winning ways after the damaging Premier League loss at Liverpool with a home victory over bottom club Leicester City.

David Silva put the hosts ahead right on half-time but the three points were not completely secure until substitute James Milner turned in a simple finish two minutes from the final whistle.

Man City still face an uphill task to retain their title as they remain five points behind Chelsea having played a game more.

Krul had made a string of great saves but his sloppy clearance found it's way to Young and the winger finished well.

Newcastle brought on Jonas Gutierrez in the second half for his first game in 17 months after overcoming cancer.

Also, Manchester United defender Jonny Evans and Newcastle United striker Papiss Cisse appeared to spit at each other in a heated first-half tussle.

Olivier Giroud opened the scoring, poking home when on the ground after Kieran Gibbs's shot was blocked.

Alexis Sanchez beat Robert Green at his near post to double Arsenal's lead.

QPR faded after a strong first-half performance, although they were given late hope by Charlie Austin's powerful strike with eight minutes left.

Moses powered a 32nd-minute header into the top corner from Phil Bardsley's excellent cross to open the scoring.

Diouf then prodded in a late second for Mark Hughes' side after Marko Arnautovic's shot hit the post.

Defeat leaves Everton with 28 points from 28 matches - their worst points tally at this stage of a season since the Premier League started in 1992.

Swansea striker Bafetimbi Gomis needed several minutes of treatment on the pitch after collapsing during his side's defeat at Tottenham.

Gomis was carried off, having collapsed after Nacer Chadli put Spurs 1-0 up, but Swansea later said he was "fine".

Gylfi Sigurdsson managed to get a goal back for Swansea but it wasn't enough to stop Spurs getting all three points.

Chelsea stayed five points clear at the top of the Premier League as a hard-fought win at West Ham kept them on course for a first title in five years.

Eden Hazard headed the visitors ahead from Ramires's right-wing cross.

Ramires shot against the post for the visitors after the break before having a header brilliantly saved by Adrian.

West Ham troubled Chelsea throughout but poor finishing ensured the visitors survived a nervy second half to hold on to another crucial victory.

Jordan Henderson continued his good form as Liverpool captain as he scored and set up another in a comfortable win over strugglers Burnley at Anfield.

Standing in for injured skipper Steven Gerrard, Henderson smashed in a 20-yard shot to give Liverpool the lead.

The 24-year-old then crossed for Daniel Sturridge to head in on his return to the starting line-up.

Liverpool move back above Southampton into fifth, two points behind fourth-placed Manchester United.