It's that time of year again, where we celebrate authors, illustrators, books and reading...

It's World Book Day of course!

Every year thousands of you celebrate World Book Day by dressing up as characters from your favourite books.

World Book Day is celebrated all over the globe to get you excited about reading and writing. 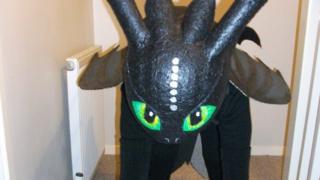 Elise, Cambuslang, Scotland - how amazing is this costume! Elsie has chosen to be Toothless from 'How to Train Your Dragon'

Thanks for sending in your brilliant World Book Day costumes to us here at Newsround HQ. Here is a selection of some of the ones you sent in, sorry we couldn't show them all. 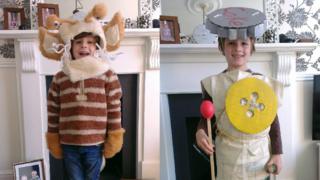 Check out these brothers from London in their amazing outfits - Heath is dressed as It from from 'Five Children & It' because he loves the idea of granting wishes to people today. His elder brother Oak is Pod from 'The Borrowers' because he is the ultimate recycler 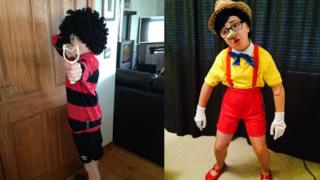 UGC
Watch out! Jack from Orkney is ready to cause some trouble as Dennis the Menace this World Book Day. Sam from Manchester has dressed up as the puppet Pinocchio, and from the looks of their nose, it doesn't look like they've been telling to many lies today! 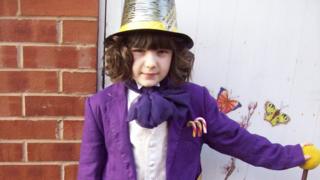 UGC
Six-year-old Edie from Ackworth has dressed up as Roald Dahl's king of chocolate: Willy Wonka! We love the candy canes in your pocket! 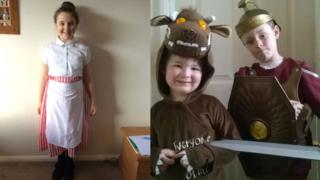 UGC
Here is Martha from Woking dressed as Mrs Pepperpot, ready to go on an adventure! Thomas and Callum from Stanley are dressed and ready for action as the Gruffalo and a Roman Soldier. Amazing work guys! 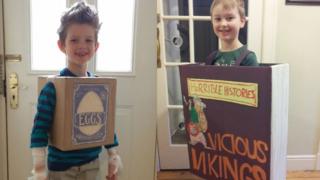 UGC
Charlie who is seven from South Wales has joined the Boxtrolls as Eggs, for his World Book Day costume! We love Oliver's Horrible Histories book costume, here at Newsround HQ it looks like a real page-turner! Get-it?!... 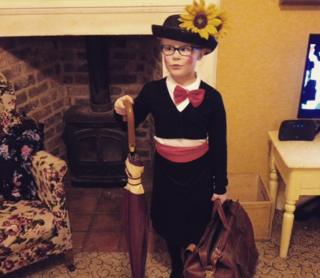 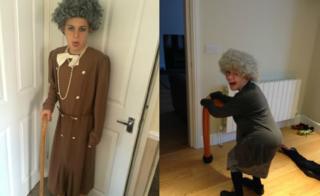 William (from Southend, England) and Oli (from the Isle of Man) have decided to go to school as Gangsta Granny from the book by David Walliams. 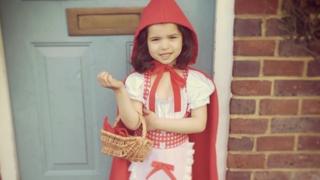 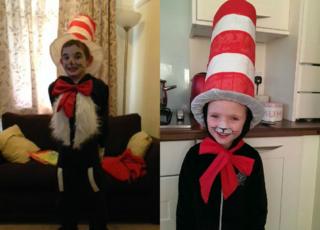 Dr Seuss would be proud of these two - Ollie (from Rotherham, England) and Evie (from Newcastle, England) have both dressed up as the Cat in the Hat 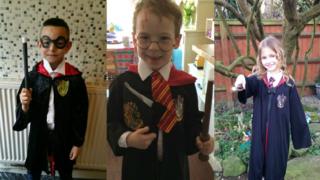 Harry Potter characters have been a very popular choice for kids - Makki (from Nottingham, England) and Kit (from Watford, England) both decided to dress as Harry. On the far right, May (from Hereford, England) decided to be Hermione because she loves her hair and she is loyal to her friends 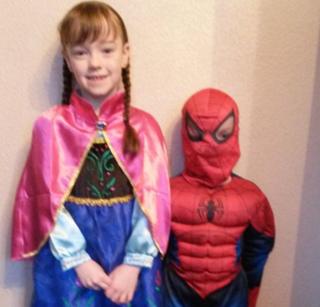 Ellie and Kayden, Sheffield, England - Ellie has dressed up as Anna from Frozen whilst her younger brother Kayden will be climbing walls as Spiderman 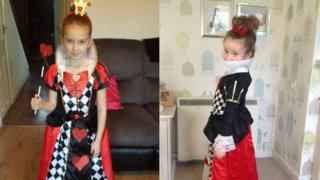 Both Macey (from Wateringbury, England) and Florence (from Warwickshire, England) have dressed up as the Queen of Hearts from Alice in Wonderland 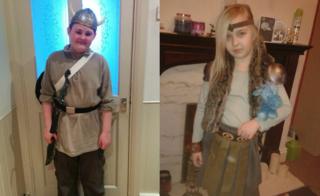 Check out these guys who have dressed up characters from How to Train Your Dragon - Ben (from Hartlepool, England) is looking cool as Hiccup Horrendous Haddock III. Brody (from Doncaster, England) is Astrid. 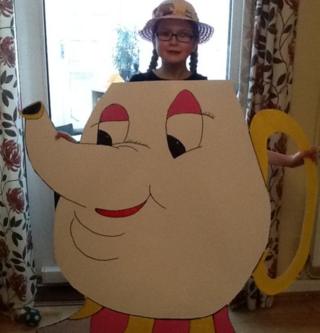 Becky (from Bedford, England) made her own wonderful costume. She's Mrs. Potts from Beauty and the Beast 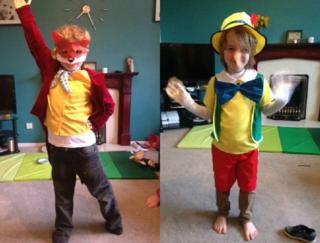 Mac and Cameron, Prudhoe, England - these two brothers have gone all out for world Book Day. Mac is dressed as Fantastic Mr. Fox and Cameron is Pinocchio 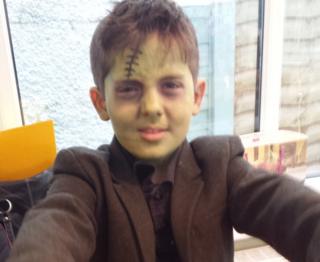 Luke, Kendal, England - He's alive! Luke is dressed up as Frankenstein's monster from the book by Mary Shelley 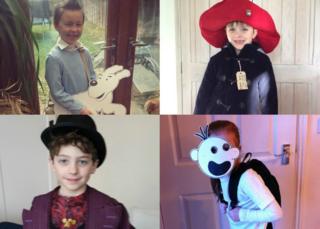 These four book characters have all had films made about them in recent years. (Top left) Jay from Hull, England, is Tintin complete with spikey hair and Snowy the dog. (Top right) Joe isn't from Peru but he definitely is Paddington Bear! (Bottom right) Heather from Bedfordshire, England, has turned herself into Greg from 'Diary of a Wimpy Kid'. (Bottom left) Roberto from London has put on a sparkly suit to be one of Roald Dahl's most famous characters - Willy Wonka. 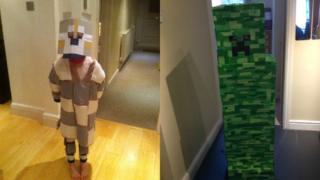 All you Minecraft fans will like these next two costumes - Grace (from Plymouth, England) is Barnaby the Minecraft Dog, and Taylor (from Coseley, England) is The Creeper 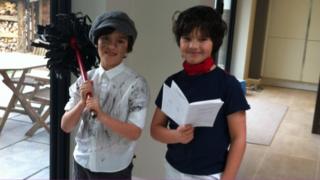 Isaac is dressed up as Soot from 'Awful Auntie' and his brother Antonio is Timmy Failure. Looking great guys! 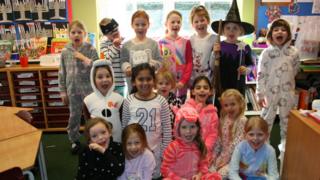 These Year 6 and 7 kids from Horsham, England, had a choice of dressing up as a book character or in a comfy onesie so they could snuggle up in with a good book 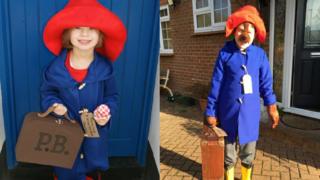 Paddington Bear is one of today's most popular costumes - both Molly (from Cornwall, England) and Andrew (from Surbiton, England) dressed up as the marmalade-loving bear from deepest, darkest Peru 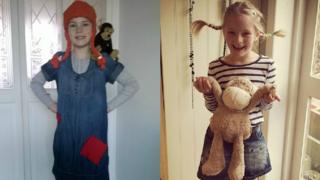 Lily (from Stanford-Le-Hope, England) and Amelie (from Leeds, England) have both turned into Pippi Longstocking by Swedish author Astrid Lindgren 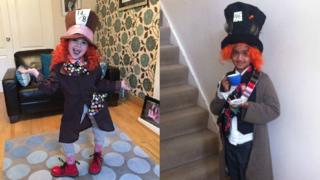 Phoebe (from Prudhoe, England) and Dhruv (from Harrow, England) are the Mad Hatter from 'Alice in Wonderland' 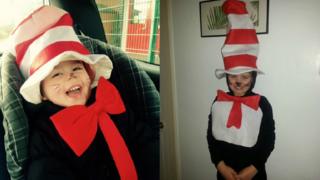 Bella (from Didcot, England) and Natalie (from Dundee, Scotland) are looking happy to be the Cat in the Hat from the Dr Seuss books 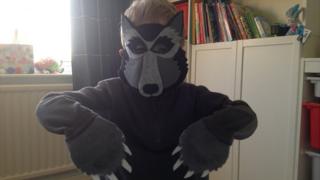 UGC
Red Riding Hood had better watch out, because Zack the Big Bad Wolf is here! He thinks that people might get scared and run away when they see him, because they might think he is a real wolf instead! We think you make a very convincing Wolf Zack - please don't gobble us up!

Why is World Book Day important?