Scientists have worked out the body weight of the world's most complete Stegosaurus.

The animal is one of the instantly recognisable dinosaurs thanks to a row of sharp bony plates along its spine.

The skeleton on display at London's Natural History Museum is 80% complete.

Palaeontologists have now found the dinosaur, nicknamed 'Sophie the Stegosaurus', would have weighed about 1.6 tonnes. 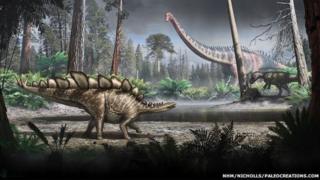 NHM/nicholls/paleocreations.com
Stegosaurus is one of the most recognisable of the dinosaurs

'Sophie' had all her bones scanned into a computer, so scientists could work out how much weight each bone could have carried.

This would have made it similar in size to a small rhino.

But then the specimen may have been aged just six or seven when she died.

Had she survived into adulthood, the beast would have been much bigger.

Scientists exploring the 'most complete' Stegosaurus