Poo on Mount Everest: Mountain waste is a big problem 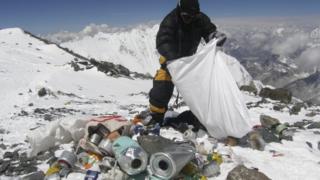 Getty Images
Climbers leave lots of rubbish up the mountain - and clearing loo waste is a big problem too!

It's being described as the 'world's highest rubbish dump'. That's because Mount Everest, the tallest mountain in the world, has a problem with climbers leaving their waste on the slopes - both rubbish and poo.

The mountain is home to three tonnes of climbers' rubbish, left by adventurers visiting the mountain. The waste includes tents and equipment left behind, as well as human waste from mountaineers who need to go to the loo while they're up there.

As the climbing season comes to a close for another year, Nepal Army helicopters are being used to lift some of the waste off the mountain.

The problem is that the rubbish is not only bad for the environment, but it could also spread disease for other climbers on the mountain.

People living at Base Camp use melted snow for drinking water, which could be contaminated with germs if other climbers aren't getting rid of their waste properly.

Read on to find out more about the problem.

More on the environment

New plans to change the way we recycle plastic

Why is there so much rubbish on Everest?

More than 500 climbers and guides spend almost two months on the mountain slopes every single year.

What is Everest Base Camp?

Some climbers carry disposable travel toilet bags to use in the higher camps, while at Base Camp, there are toilet tents which have special drums where human waste goes. These can be taken away from the mountain and emptied safely.

But the camps further up, between the base and the top of the mountain, don't have loos, which is why waste is often left behind.

Climbers can only go up Mount Everest during a specific period of the year, which begins in March and ends in May. Throughout the rest of the year, the weather is too bad.

This means that it is more difficult to clear away any rubbish left on the mountain at the end of the climbing period, which has just finished for 2019.

It is impossible to know exactly how much litter is spread across Everest because it only becomes visible when the snow melts.

Speaking in the Himalayan Times, Dandu Raj Ghimire - director general for the Nepal Department of Tourism - said: "The clean-up campaign will be continued in the coming seasons to make the world's tallest mountain clean. It is our responsibility to keep our mountains clean." Getty Images
The summit of the world's tallest mountain, Everest, is 8,848m above sea level
What are the rules about rubbish on Everest?

Nepal's government hasn't made rules about dealing with poo up the mountain yet. However, it is trying to stop the amount of rubbish that is left on the slopes.

The government is working on a plan to scan and tag climbers' equipment and gear.

All climbers would have to pay a deposit of $4,000 (£3,100) before they go up the mountain and might not get their money back if they return without their items.