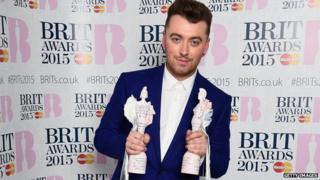 Sam Smith and Ed Sheeran are at the top of the first UK album chart to take into account streams as well as sales.

It looks like winning awards at the Brits helped both of them, with each getting a boost in sales.

Sam Smith went back to number one after picking up best breakthrough artist and the global success award.

Streaming numbers doubled in the UK in 2014 while CD sales dropped by 8%.

The Official Charts Company has come up with a complicated way of adding streams from the likes of Spotify, Deezer and Google Play to the sales of downloads and CDs.

They use a mathematical formula to calculate how many times the tracks on an album have been streamed, and they work out how much that should add in sales. 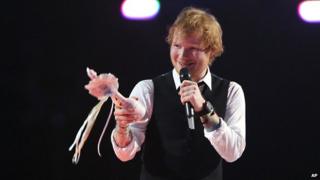 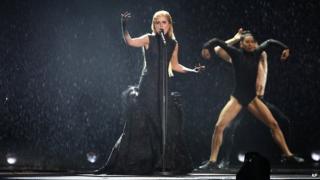 "Sam and Ed are both established as genuine superstars now," said Martin Talbot, boss at the Official Charts Company.

"The fact that they appeal to fans who buy CDs, snap up album downloads and stream music highlights just how broad their appeal is."

Streaming has been part of the singles chart since last July.

This week's top five singles are the same as last week: Ellie Goulding is spending a fourth week at the top, followed by Hozier; Mark Ronson featuring Bruno Mars; The Weeknd; and a song by Sir Paul McCartney, Rihanna and Kanye West.