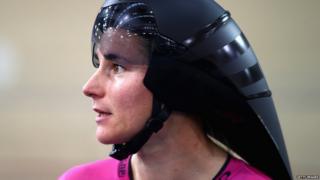 Sarah managed to ride 45.502km in an hour at the London Olympic velodrome.

But it wasn't quite enough to beat the world record of 46.065km set in 2003 by Dutchwoman Leontien Zijlaard-van Moorsel.

However the distance she rode meant she did set a new British and Paralympian C5 best.

"It was definitely the hardest hour of my life," Storey said.

"I came in here hoping to go further than 46km, but to break the British record, I'm really chuffed."

"It's not as far as Leontien but to miss out to her is no bad thing."

The 11-time Paralympic champion, was ahead of schedule early on but fell behind after 30 minutes and dropped further away to finish 563m short of the current record.