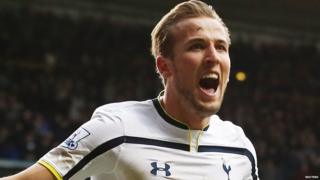 Ten years ago at a special training camp he told football legend David Beckham that he hoped to play at Wembley Stadium one day. 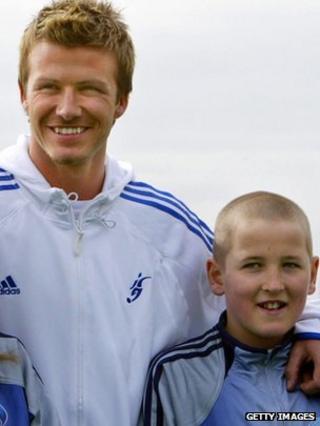 Getty Images
David Beckham with a young Harry Kane at a training camp.

And today he fulfils it, playing at Wembley in the Capital One Cup final.

What dreams do you hope to achieve one day? Or have you achieved any of your dreams already?

Thanks for all your comments. Here are some of the comments that came through. This page is now closed.

I want to be a lawyer because everyone deserves justice.

My dream when I grow up is to sing live on TV. I already sang on my school's talent show. I know my only way to achieve it is to work harder and to sing more in the talent shows.

When I am older I would love to be a professional show jumper as horses are my favourite animals and I go to the stables every weekend, and really enjoy riding.

I want to be a footballer because Lionel Messi is my inspiration.

I would like to be an actor when I'm older because it has been a dream of mine since I was young.

What I want to achieve in the future is to become a scientist one day but I know I have to work really hard and never let any one hold me back.

My dream is to be really good at gymnastics.

I want to be a children's author because Jacqueline Wilson has inspired me and I'm already writing short stories.

I have big hopes for the future. I want to be Prime Minister and make sure the country is right!

I would like to be an actor because it has been a dream of mine since I was young.

My dream is to become a singer.

When I'm older I want to be a gymnast and compete in the Olympics and Commonwealth Games.

I would like to play for a top league team and I'm half way there - I'm playing for under 13 premier league.

My dream is to become a teacher because it's fun as you need to learn in order to achieve your targets and become a good teacher and hopefully get to boss people about!

My dream is to advertise girls rugby! Many people believe it is just for boys and I think that that is wrong. Next week my team will be playing in a cup final to be champions of the south west!

I want to be a professional swimmer and represent the United Kingdom and to achieve that I need to keep going swimming.

My dream is to become a professional dancer and to compete in competitions worldwide. Dancing is like a gift that you can share with anyone who watches it, and I love it.

I want to be a footballer when I'm older - ever since I was 4 this has been my dreams. Just because I'm a girl this doesn't mean I cannot play.

My dream is to become a vet, I know my only way to achieve it is to work hard and not give up.

My dream's to be a singer. I have sang in assembly and applied for BGT but I really want to do it as a career when I'm older.

When I am older, I hope to be a writer writing books about feminism for children. A lot of children see feminism as a bad thing because they don´t understand it. I hope that when I am older I can change that.