Ancient caiman would beat T-Rex in a fight, say scientists 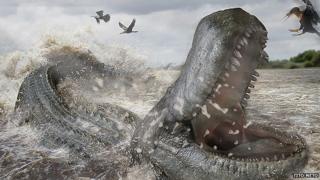 Tito Neto
The caiman could measure up to 12.5m in length

A Tyrannosaurus Rex might be known for its ferocious bite, but now scientists say a caiman that lived eight million years ago, had a bite TWICE as powerful.

Known as Purussaurus brasiliensis, the reptilian predator lived in the Amazon region in South America.

"The Purussaurus and the Tyrannosaurus lived in different ages but there's no doubt the Purussaurus would have won a fight between the two of them," said Aline Ghilardi, one of the Brazilian researchers who did the study.

Caimans are like alligators - and some species are still around today, though nowhere near the size of this one - which grow to over 12 metres long. 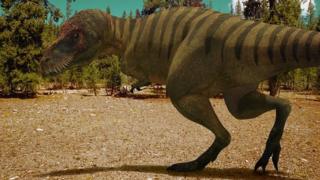 About 66 million years have passed since the last T-Rex roamed the Earth.

Scientists say the strength of its jaws was 20 times that of a Great white shark's bite, and its head was a better shape for biting than a T-Rex's, so it could have eaten larger prey.

And the reptile needed to eat more than 40kg of meat a day: that's 20 times the amount modern-day alligators eat.