Residents of a town in the Netherlands are putting their umbrellas up - not to guard themselves against the rain, but against an owl on the loose!

A European eagle owl has already injured dozens of residents of Purmerend, a town 10 miles from the country's capital city Amsterdam.

They're being told to stay safe and are defending themselves with umbrellas.

The bird is one of the largest owl species, with wings stretching 1.8 metres across. 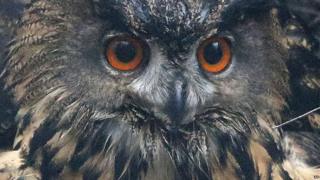 But in the Netherlands this is a protected bird, so the town of Purmerend needs special permission to catch it.

One owl expert says the bird's behaviour is unusual and it might be because it is the start of the breeding season.

Barn owl does a poo during Newsround interview!

Owls made out of car hubcaps