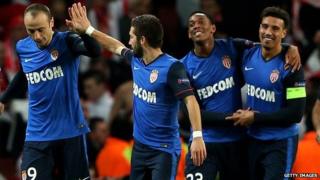 It was a night to forget for Arsenal in the Champions League as they lost 3-1 at home to Monaco.

It means their hopes of reaching the quarter-finals for the first time since 2010 are slim.

The Gunners looked disorganised and ragged against Monaco, a side that used to be managed by Arsene Wenger.

At 2-0 down in the 90th minute, Alex Oxlade-Chamberlain scored to give Arsenal some hope - which they threw away by conceding again.

Yannick Ferreira Carrasco added a third goal as the home side were caught hopelessly on the counter.

Afterwards Arsene Wenger admitted Monaco's third goal could be crucial, saying: "The task is massive now. The third goal makes it even more difficult. We will have a go of course."

Monaco had taken the lead in the first half through Geoffrey Kondogbia's deflected shot.

Getty Images
When Alex Oxlade-Chamberlain scored, there was some joy on Arsenal's bench - but Arsene Wenger looked frustrated

When Arsenal did create chances they went to waste as Olivier Giroud missed every one that came his way.

They'll have a tough job indeed to overturn the deficit in the tie's second leg in Monaco.