Sea creatures in all our oceans are getting bigger.

In the past 542 million years, the average size of a marine animals has gone up by a factor of 150.

Today's tiniest sea creature - with a body covered in a hard shall - is less than 10 times smaller than those from hundreds of millions of years ago, when measured in terms of volume. 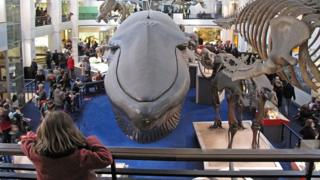 The model of the Blue Whale hanging in the Natural History Museum, London.

At the other end of the scale, the mighty blue whale is more than 100,000 times the size of the largest animal 542 million years ago.

This was a crustacean with a clam-like, hinged shell.

The American fossil specialist Edward Drinker Cope - who was a 19th-Century palaeontologist - who examined fossils, found that the ancient ancestors of modern mammals were often smaller.

For example horses, can be traced a dog-sized animal from 50 million years ago.

But this pattern isn't the same across the whole animal kingdom.

Most groups of dinosaurs got bigger until they died out - but the birds that evolved from them, grew smaller and lighter because they needed to fly quicker. 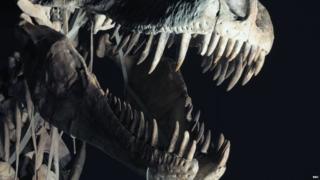 Skeleton picture from BBC Horizon : Dinosaurs The Hunt For Life

Dr Noel Heim, from Stanford University in California, wanted to test Cope's findings in the vast realm of the ocean.

For five years he got dozens of workmates, students and even high school pupils, to look through all the scientific record for body size data.

They also measured hundreds of illustrations from old books about fossils. 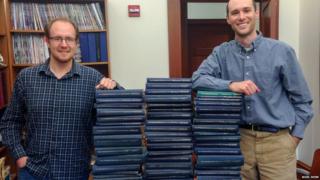 Eventually they put together information on more than 17,000 groups of species, called genera. That's over 60% of all the animal genera ever to have lived.

This information showed animals were getting bigger and bigger over time.

The team also wanted to work out whether their massive size was driven by evolution, or was simply a matter of chance.

They put their size data from the oldest animals into a computer model where each species could die out, stay the same, get bigger or smaller. 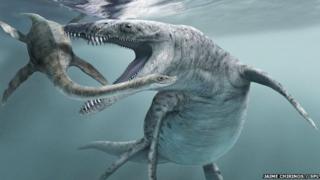 The results that best matched the real fossil history was one where animals were genuinely bigger.

More oxygen in the water may also have helped.