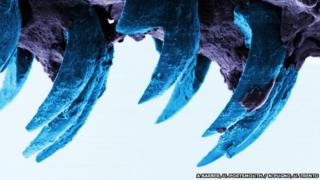 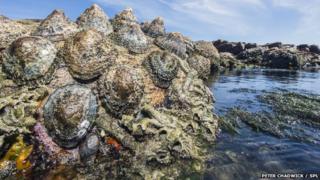 Now engineers say the teeth - which are less than a millimetre long - are made of the strongest biological material ever tested.

They say they have the same strength as one string of spaghetti holding up 3,000 half-kilogram bags of sugar.

Limpets have a tongue covered in these tiny teeth that can scrape food off rocks and into their mouths.

The teeth are made from minerals and proteins.

When they were tested in a lab, engineers found they were five times stronger than silk spun by spiders.

'Bulldozers of the shore ''

They are also stronger than the toughest man-made materials.

They're strong, because of the thinness of its tightly packed fibres.

It could help improve the man-made materials used to build aircraft, cars and boats.

"Biology is a great source of inspiration as an engineer," said Dr Asa Barber, from the University of Portsmouth, the study's lead author.

The team ground 10 of the teeth into a tiny dog-bone shapes to measure the amount of force they can withstand before they break. 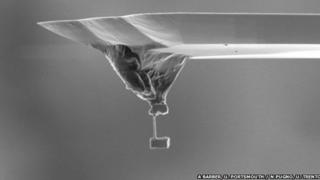 The middle part of these samples was more than 100 times thinner than a human hair.

When compared to man-made materials, the limpet tooth is stronger than Kevlar. That's a plastic strong used to make boats, bowstrings, to reinforce tyres.

"Limpets are the bulldozers of the seashore," said Professor Steven Hawkins, from the University of Southampton.

"The reason limpet teeth are so hard is that when they're feeding, they actually excavate rock "

Could medicines be found in the ocean?