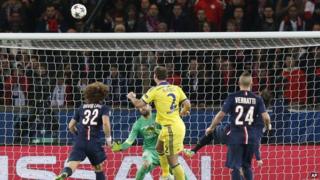 Chelsea had to battle for a 1-1 draw with Paris Saint Germain in the Champions League.

The blues were battered at times, but some great goalkeeping from Thibaut Courtois helped Chelsea save a valuable away draw.

Branislav Ivanovic gave Jose Mourinho's team a first half lead before the French team equalised in the second half.

The two will now play at Stamford Bridge for a place in the quarter-finals of the competition.