Kids go back to school in Liberia after Ebola closure 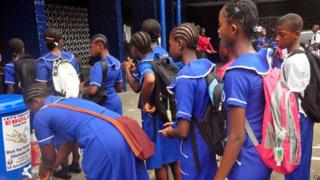 Hundreds of thousands of kids are back at school in Liberia, after schools were closed for more than six months.

The schools were closed in the west African country as a precaution to try to stop the spread of the Ebola virus.

There are strict rules about washing hands to make sure schools are safe.

The outbreak began in December 2013, over 3,500 miles from the UK in Guinea, and then spread to other countries in west Africa, with Sierra Leone and Liberia the worst affected.

Liberia was the country worst hit, with nearly 4,000 people killed there.

The children's charity, Unicef, said it doesn't expect all schools to reopen immediately as some aren't ready.

Guinea reopened its schools a month ago; Sierra Leone plans to do so at the end of March.

While the schools were closed, over a million children weren't able to go to class.

Instead lessons were broadcast on the radio, enabling students to carry on learning.

As students go back to school today, they must wash their hands thoroughly to disinfect themselves, and they have their temperature taken to make sure they don't have the disease.

Schools are also being asked to limit the number of kids per classroom to avoid overcrowding. 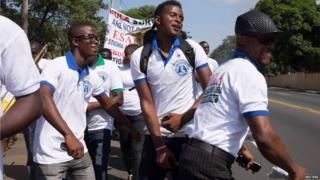 Reuters
These survivors who had the disease but got better, celebrated as they paraded in Monrovia, Liberia's capital city on Valentine's Day

More than 9,000 people have been killed by the latest outbreak in West Africa, but charities helping fight the disease say things are getting much better.

The number of new cases of Ebola each week is much lower now than a few months ago, and authorities are hopeful that means they're getting the disease under control.