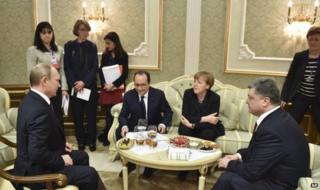 "We have managed to agree on the main issues," he said after talks with Ukraine's president Petro Poroshenko, and the leaders of France and Germany.

French President Francois Hollande said it was a "serious deal" but not everything had been agreed.

Thousands of people have died in over a year of fighting in eastern Ukraine.