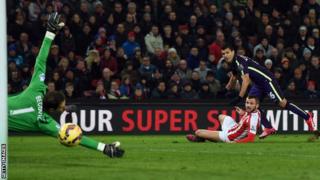 Sergio Aguero scored his first goals since December as Manchester City got their title challenge back on track with victory at Stoke.

City, who had not won at the Britannia Stadium in the Premier League, took the lead through Aguero's run and finish.

Peter Crouch stooped to head a deserved equaliser for Stoke but James Milner nodded Manchester City back in front.

Aguero got his second from the penalty spot after David Silva had been fouled, before Samir Nasri drove in a fourth.

Getty Images
Peter Crouch has scored 45 headed goals in the Premier League. He's only one goal behind the all-time record

It was a welcome return to winning ways for Manuel Pellegrini's side, and ensured their seven-point gap on Premier League leaders Chelsea did not get any bigger with Jose Mourinho's side beating Everton.

Southampton 0-0 West Ham: West Ham had goalkeeper Adrian sent off but frustrated Southampton by holding on for a goalless draw at St Mary's.