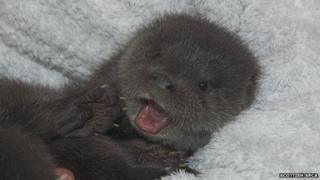 A poorly otter cub found orphaned in a Scottish village is recovering after being taken in by the Scottish Society for the Prevention of Cruelty to Animals (SSPCA).

The charity was alerted after the eight-week-old cub was found in Perthshire on 4 February.

Bosses said it was "amazing" the young female had survived a night out in the cold.

The cub has been named Dipper by the staff at the charity. 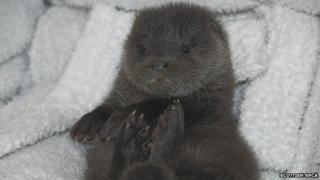 She will remain in their care until it is at least a year old before being returned to the wild.

No one knows what happened to the otter cub's parents.

Colin Seddon, the manager at the SSPCA's National Wildlife Rescue Centre, said Dipper was on the road to a full recovery.

He said: "She is now stronger, feeding well from her bottle and wants to play, which we would expect for a cub of her age."