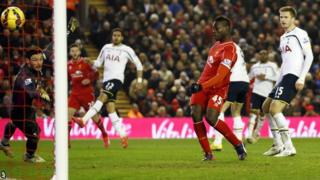 Mario Balotelli's first Premier League goal for Liverpool gave them an important victory in the fight for a Premier League top-four place in a thrilling game at Anfield.

Liverpool led twice only to be pegged back by Spurs before Balotelli, on as a substitute for Daniel Sturridge, turned in Adam Lallana's cross with seven minutes left.

Lazar Markovic gave Liverpool an early lead but man-of-the-moment Harry Kane was on the mark again to swiftly equalise for Spurs with his 23rd goal of an outstanding season.

Balotelli did not hang around to enjoy the win at the final whistle, running straight down the tunnel - but no-one appeared to notice or care as the fans celebrated this vital win.

Hull 2-0 Aston Villa: Striker Dame N'Doye marked his first start for Hull with a goal and an assist as they beat Aston Villa. Victory lifted Hull to 15th in the Premier League table and left Villa in the bottom three.

Sunderland 0-2 QPR: QPR climbed out of the relegation zone as goals from Leroy Fer and Bobby Zamora against Sunderland ended an 11-game losing run away from home.