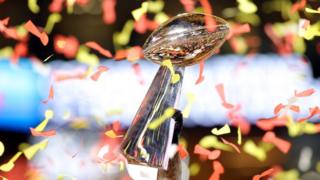 Some call it the greatest sporting event in the world, others tune in for the half-time entertainment or to try to spot A-list celebrities in the crowd.

If you don't know much about the sport but want to know more then Newsround has got you covered.

Keep reading for some handy information so you can sound just like an expert...

The basics of American football

The Los Angeles Rams scored a late touchdown to beat the Cincinnati Bengals 23-20 in Super Bowl 56.

The Bengals looked set to win their first Super Bowl - but with just one minute 25 seconds left, Cooper Kupp scored a touchdown to give the Rams a second NFL title. 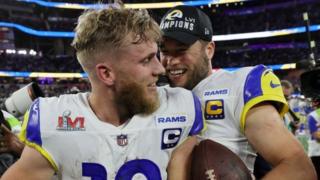 The game was played at the Rams' home ground - the SoFi Stadium.

The Bengals have never won the Super Bowl, while the Rams won it back in 1999 when the team was based in another US city, St Louis.

Ok here's how the tactics work.

Each team is split into two units; an attacking one and a defensive one.

The team which has control of the ball will have their offence (attacking players) on the pitch.

The attacking players will attempt to move the ball forward and score touchdowns. 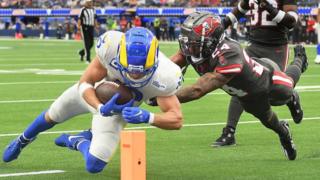 Wally Skalij
The offence (pictured left) try to get the football to the end zone for a touchdown. The opposing side's defence (pictured right) try to stop that from happening

The team without the ball it will have their defence (defensive players) on. The role of the defence is to stop the other team from scoring by tackling the ball-carrier, intercepting passes or causing fumbles.

This is true for most of the game except when one team has chosen to kick the ball. The 'special teams' come on for that.

Top tip: Make sure you pronounce defence like this: "Dee-fence".

Examples you could use: "LA Rams' offence relies a lot on Matt Stafford to be successful don't you think?" or "Cincinnati's dee-fence is the best in the National Football League". 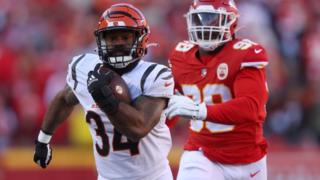 Jamie Squire
Teams often run with the ball on 1st down

These 'downs' are key to the game and pop up all the time, so nail these and you'll sound like a pro!

Basically you get four attempts (aka downs) to move the ball 10 yards (by either running with it or passing it). If you make 10 yards then you get another set of four downs.

If you watched the Super Bowl you might have seen the words '1st and 10' written in the corner of your TV screen. That means it's the 1st down with 10 yards to make.

If a team makes three yards, for example, then next it's 2nd and Seven, 3rd and Four etc. If they fail to make 10 yards in the four downs then the other team gets the ball.

Top tip: If teams fail to make 10 yards on their first three attempts then they'll probably kick it away on their 4th down. This means the other team will have further to go to score.

Examples of use: "I'd throw the ball deep on 2nd down" or "The Bengals always run the ball on 1st down" 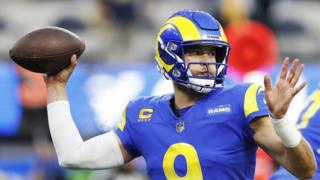 A quarterback is the leader of the team and the player that throws the ball a lot.

The play-maker for the Rams is Matt Stafford, and for the Bengals it is Joe Burrow.

Stafford is a more of a traditional player, called a "pocket passer". He will tend to stand in one spot, protected by his team (in the 'pocket') and throw the ball to a teammate.

Top tip: Players like Matt Stafford have kept the traditional way of playing the position alive. Some had predicted that pocket passers would become a thing of the past.

Examples of use: "I think Stafford is a good example of how pocket passers can still be successful in the league." 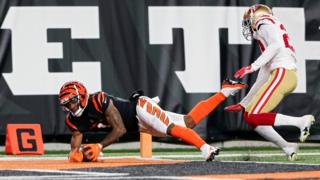 Touchdown (six points) - A touchdown is scored when a team crosses the opposition's goal line with the ball, or catches or collects the ball in the end zone.

Field goal (three points) - These are usually attempted on fourth down if the kicker is close enough to the end zone to kick the ball through the posts, or uprights.

Extra point (one or two points) - A point is earned by kicking the ball through the uprights after a touchdown (similar to a rugby conversion). Two points are earned by taking the ball into the end zone again.

Safety (two points) - Awarded to the defensive team when a member of the offensive team is tackled with the ball in his own end zone.

What about the Super Bowl half-time show? 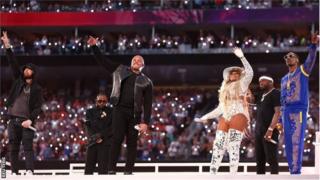 OK, so it's not strictly part of the sport but the Super Bowl entertainment is a show in itself.

The famous half-time show has seen many greats - from Beyoncé to Prince, and Lady Gaga to Bruno Mars - perform in the past.

The 2020 performance by Shakira and Jennifer Lopez was watched by 104 million people.

Why is Super Bowl 2021 such a BIG deal? Jason and Osi explain

Super Bowl 2019: Highlights of everything except the football!