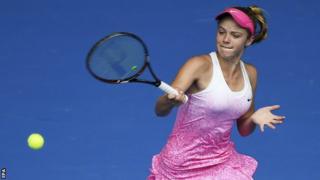 Britain's Katie Swan missed out on a junior Grand Slam title as she lost the Australian Open girls' final to Slovakian Tereza Mihalikova.

The 15-year-old from Bristol, England, struggled with a leg injury during a 6-1 6-4 defeat in Melbourne.

Swan was hoping to become the first Briton to win the title since Annabel Croft in 1984.

She joins another Brit Laura Robson as a girls' runner-up in Australia, with Robson making the 2009 and 2010 finals.

"Obviously my best tournament I've ever played. I'm really pleased with the way I've been playing this week. I hope that there are a lot more tournaments like this for me" said Swan.