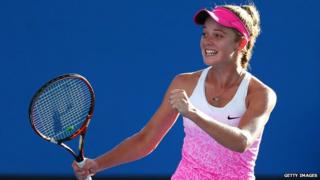 After a disastrous first set, and fighting through cramp in her leg, Katie won a second set tie-break and took the third set to clinch victory.

Katie is Britain's first junior finalist at the Australian Open since Laura Robinson who was runner-up in 2009 and 2010.

She will play against Tereza Mihalikova from Slovakia in Saturday's final.

Katie said: "I can't really believe that I'm going to get that opportunity. I'm really excited and hopefully the nerves won't affect my game.

"Hopefully I can win tomorrow but if not, I just want to play my game and see how it goes."