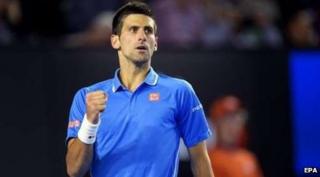 EPA
Djokovic has won every Australian Open final he has played

After a disappointing 2014, the Scot has started 2015 in tremendous form.

Afterwards, he said: "I was disappointed to lose the first set.

"But I started to play better as the set went on and I was very aggressive at the beginning of the second set.

"[Berdych] hits the ball hard and I got used to that. I tried to play aggressive, after losing a tough one like the first [set] it was important to get the momentum back."

He went on to thank his coach Amelie Mauresmo: "A lot of people criticised me working with her and we've shown this week that women can be very good coaches as well.

"I'm very thankful to Amelie for doing it. It was a brave choice from her to do it and hopefully I can repay her in a few days."

The final will be live on BBC Two and BBC Radio 5 live on Sunday morning from 8.15am.