Andy Murray easily won his Australian Open quarter-final against home rising star Nick Kyrgios, to set up a clash with Tomas Berdych in the semi-finals.

Kyrgios, who's 19, is the first Australian man for 10 years to reach the last eight stage and had the support of a noisy home crowd.

But Murray, ranked 47 places higher than Kyrgios, was too strong and will face seventh seed Berdych on Thursday. 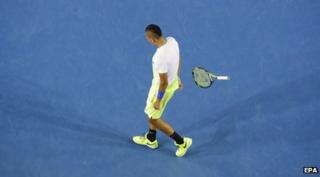 Both players had to combat windy conditions on the court, and Murray said afterwards: "It was a tricky match pretty windy, tough for both of us.

"I played a slightly different style tonight - and thankfully it worked."

I don't know who will win between Murray and Berdych - it's a tricky one to call. But Berdych hasn't won a [Grand] Slam so I suppose that gives the edge to Murray. One thing is for sure... it's going to be a ripper.

Asked about his semi-final against the Czech Berdych, Murray said: "Tough match. He's another big hitter of the ball.

"He's played extremely well so far this tournament. I don't think he's dropped a set yet. It'll be extremely tricky. Hopefully, I put in a great performance."

Earlier on Tuesday Berdych beat a struggling Rafael Nadal in straight sets to end a 17-match losing streak and to pick up his first win against the Spanish legend since 2006.

Nadal has had a very difficult year - a wrist injury and appendicitis meant the second half of 2014 was spent in recover for the Spaniard.