'Super Saturn' with giant rings is first outside solar system 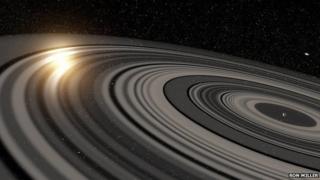 Ron Miller
This drawing shows how the ring system would compare alongside Saturn (the tiny dot, top right)

Scientists have discovered an enormous ring system around a star, the first of its kind outside our solar system.

New research shows that the system around the star - called J1407 - consists of over 30 rings, each of them tens of millions of kilometres across.

"This planet is much larger than Jupiter or Saturn," said Eric Mamajek, who helped write the research.

"Its ring system is roughly 200 times larger than Saturn's rings. You could think of it as kind of a super Saturn." 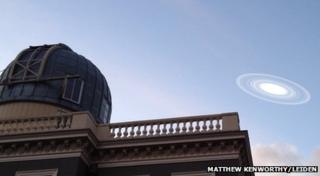 Matthew Kenworthy/Leiden
If the rings around Saturn were the size of those around star J1407, this is how they'd appear in our sky

Researchers from the University of Rochester in New York, also found gaps in the rings, which suggests that moons may have formed and started to orbit the star.

"If we could replace Saturn's rings with the rings around J1407, they would be easily visible at night and be many times larger than the full moon," added Matthew Kenworthy from the Leiden Observatory in the Netherlands, which helped with the study.

The young Sun-like star was first discovered in 2012, and researchers spotted that the light it gave off was varied - with regular eclipses. They thought these eclipses were being caused by giant rings, which further study has revealed to be the case.

The results from the study will be published in the Astrophysical Journal.

Incredible pictures of galaxies and stars released by Nasa