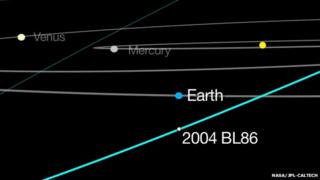 NASA/JPL-Caltech
Nasa have shown the

A big asteroid will safely fly past the Earth later today, one of the closest approaches for years.

In the future, [asteroids] will become valuable resources for mineral ores and other vital natural resources. They will also become the fueling stops for humanity as we continue to explore our solar system.

At its nearest point, the asteroid will be around 745,000 miles away, about three times the distance from the moon to Earth.

Space scientists say it might be possible for people to see it using binoculars or a small telescope.

Don Yeomans, an asteroid expert who works for Nasa said: "I may grab my favourite binoculars and give it a shot myself!

"There is something about asteroids that makes me want to look up."

This is the closest this asteroid will get to us for 200 years as it continues on its long orbit around the Sun.