The FA Cup: Holders Arsenal hold on to beat Brighton

Defending champions Arsenal reached the FA Cup fifth round but were forced to hang on for victory against Brighton at the Amex Stadium.

Theo Walcott gave the Gunners the lead on 89 seconds when he converted Calum Chambers' cross from the right.

Mesut Ozil then made it 2-0 when he slotted in from inside the area.

Tomas Rosicky volleyed home a brilliant third after Brighton's Chris O'Grady had pulled a goal back for his side. 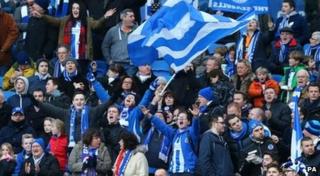 Sam Baldock's goal for the home team set up an exciting final 15 minutes but Arsenal held on to win.