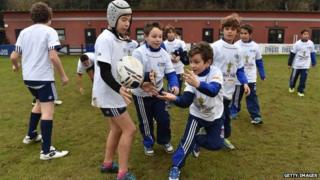 Parents and coaches at junior rugby matches in Yorkshire have been asked to stop shouting at players!

Yorkshire Rugby Football Union (YRFU) said a "small minority" of people had been rude to referees and challenged their decisions.

A letter was sent to parents explaining that shouting by the pitchside caused referees to quit and put players off.

The letter said: "Some coaches, parents and spectators are constantly shouting at their players."

Although YRFU has asked for Silent Sundays it did say it wouldn't enforce the shouting ban.

Does shouting put you off during sport?

My team mates shout at whoever has got the ball so I think they should be a little quieter.

When I play netball, my coach and everyone's parents shout lots, but encourage our team. Sometimes it puts me off a tiny bit but it also helps our team to play better so I like it when everybody shouts.