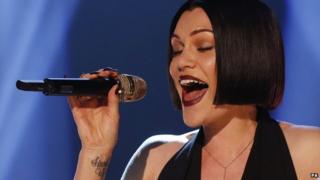 Jessie J has revealed she was bullied as school, because medicine she had to take made her skin look green.

As a child, the singer had problems with her heart - which meant she had to spend a lot of time in hospital.

During that time, her treatment affected her skin, which she described as having an "alien tint".

This green tint to her skin attracted bullies who gave her a tough time. It inspired her to write Who's Laughing Now, a track on her first album.

"I had really big teeth, a big fringe. I was just uncomfortable in my skin. I wasn't the pretty kid, I was the awkward one that didn't know who I fitted in with."

She now says that by talking about it in her music, it might help other people who are having tough times.

"I almost feel like I want to be a big sister to my fans that need one. I can put out music that I think will help them through some stuff."

Jessie J announces she is leaving The Voice