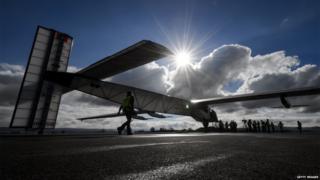 Getty Images
The Solar Impulse-2 plane takes off for a trip around the world, from Al Bateen Executive Airport in Abu Dhabi

A solar powered plane called Solar Impulse 2, has launched successfully and is now attempting to become the first solar powered flight to travel around the globe.

Solar Impulse 1 has already flown across the United States, storing enough energy from the sun to fly overnight.

Now, after launching from Abu Dhabi in the Middle East on 9 March, Solar Impulse 2 is aiming to go one better and fly for 25 days, over 5 months, all the way around the Earth.

Where it will stop?

With wings 72m wide, the same as a Boeing 747 Jumbo Jet - it's really light, and that allows it to be powered with as little power as possible.

The super-wide wings allow it to take advantage of air currents to glide without the need for much power.

It'll also fly much, much slower than jet planes do - its top speed will be 62mph, 10 times slower than most jets.

So the plane can carry smaller, lighter batteries to store energy at night. 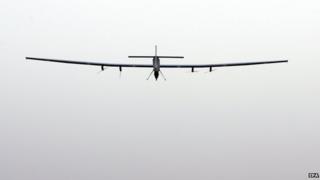 New technology since the first Solar Impulse plane has also allowed batteries to be much more energy efficient.

Batteries that can allow the plane to fly for hours without any sunlight are now tougher, lighter and much more compact.

The two pilots who are going to fly the plane on its 25-day, 12-stop flight have plenty of experience too.

Andre Borschberg was the first person to fly for 24 hours on nothing but solar power, back in 2010.

Bertrand Piccard was part of the team that flew around the world non-stop in a balloon.

His grandfather was the first person to climb high enough in a balloon to see that the Earth was curved, with his own eyes. 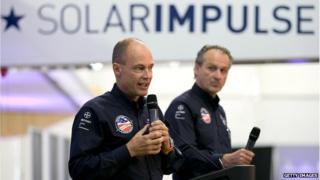 Getty Images
Two pilots will fly the mission, and they both have lots of experience

The very latest technology used in the plane is already being put to use in other areas.

Inside the cockpit, a specially made thermal foam is used to control the temperature - and that has already been used in some fridges. 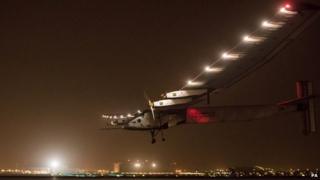 The most important part of the mission is generating enough energy to power the flight not only when it's sunny - but also in the dark.

For that, the wings of Solar Impulse 2 are covered with 17,000 solar panels, which should gather enough energy to save for night-time flying.