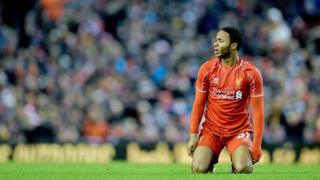 Chelsea drew 1-1 with Liverpool in the first leg of their Capital One Cup semi-final.

Chelsea dominated the first half at Anfield and took the lead with Eden Hazard's penalty - his fourth of the season.

But the second half was a different story, and Liverpool came back into the game.

It was the lightning fast pace of Raheem Sterling that helped them equalise.

He sprinted past the Chelsea defence to finish a brilliant individual goal.

The two teams will now head to Stamford Bridge for the second leg - with the place in the final at stake.